Saudi Arabia seems to be one of the most preferred travel destinations for the young vultures from the Rhodope Mountains in Bulgaria. Two of the equipped with satellite transmitter vultures have spent nearly five months far away from home finally reaching Saudi Arabia.

One of birds was marked near Sredna Arda river in the Rhodopes and therefore bears the name Sarda and the other was tagged in a nest near Madjarovo. Both vultures were hatched in 2019 and very soon after that embarked their first migration south. “This is their first trip  to Saudi Arabia,so far they are alive and doing well, searching for food, crossing their ways and even feeding together every now and then. In a month or two they should head back to the north and hopefully reach Bulgaria and Rhodope Mountains”, comments BSPB’s Volen Arkumarev.

This is not the first time young Griffon Vultures have embarked on a journey to a far away country. Another traveler – Arda has spent several winters in Saudi Arabia. Last year another Griffon vulture named Kaya chose to travel to Israel and Syria, where she was even “caught” by photo traps placed at a feeding site in one of Israel’s national parks. The photo- traps captured interesting moments from the wanderings of the griffon, with one of the photos showing Kaya sharing lunch with a fox. Shortly after, Kaya was captured by Israeli ornithologists in the Negev Desert, where they annually captured, marked and took samples from the vultures. 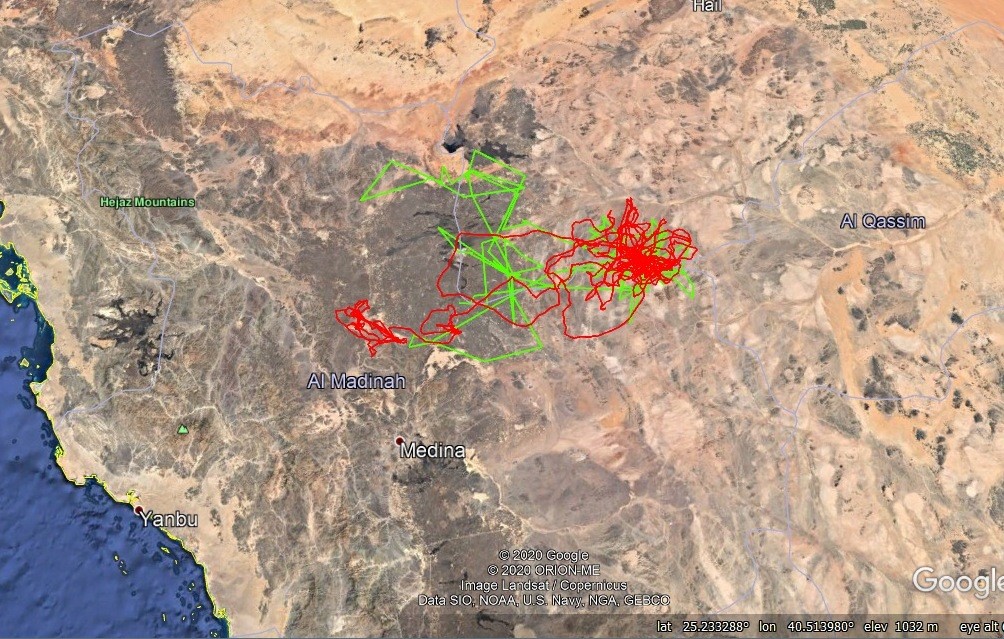 Data from transmitters is obtained on a daily basis and the project team closely monitors the movements of marked birds, feeding and resting areas, as well as places where more vultures congregate. “In the absence of a signal from any bird or unusual behavior, a field check is carried out by the team or foreign colleagues if the bird is located outside Bulgaria,” said Dobromir Dobrev, of the Bulgarian Society for the Protection of Birds.

Satellite tracking allows experts to easily locate transmitter-equipped vultures. This enhances the knowledge and information available about their distribution, movements, threats, and mortality in these birds. This important conservation activity is being implemented under the LIFE Project “Conservation of black and griffon vultures in Rhodope Mountains”  (LIFE Vultures) developed by Rewilding Europe in partnership with Rewilding Rhodopes Foundation, Bulgarian Society for the Protection of Birds/BirdLife Bulgaria (BSPB), WWF Greece, Vulture Conservation Foundation and Hellenic Ornithological Society/BirdLife Greece.

Back to news
Manage Cookie Consent
We use cookies to optimise our website and our service.
Manage options Manage services Manage vendors Read more about these purposes
View preferences
{title} {title} {title}