The Meteora of the North

In the Kompsatos River Valley, the Thracian Meteora dominate the landscape from every viewpoint. Above the town of Iasmos, in the Rodopi prefecture, the Kompsatos Valley spreads up to the Greek-Bulgarian borders. The only activities in the Valley that persist are livestock farming and silviculture. Most residents are occupied with free grazing of livestock near the flatland settlements during the winter and around their mountain villages in the summer. Only a handful of people reside up to these ruined villages. 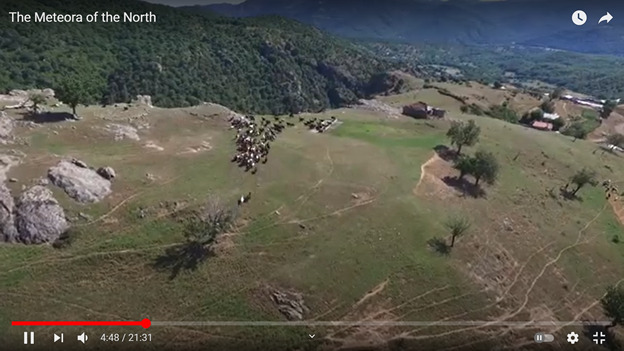 This area is integrated in the European network of protected areas Natura 2000. It hosts three of the four European Vulture species– the Griffon Vulture, the Cinereous Vulture and the Egyptian Vulture. These birds use the border region of Rodopi to forage. The reason they still find shelter here is the preservation of the traditional free-grazing livestock way of life.

In the framework of the LIFE Re-vulture programme, WWF Greece created in the Kompsatos Valley five feeding sites for the vultures where the livestock breeders can leave their dead animals. According to European Law, livestock breeders have to bury the animals, something very difficult for them because of the rocky ground. Another option would be for the animal by-products service to pick up the carcasses which is again very challenging as the area is remote and far away from the flatlands. With this initiative, the livestock breeders are operating within the boundaries of the law by leaving their dead animals in spots designated by the local services. The vultures are also benefited as they can find a safe and accessible source of food.

Livestock farming is closely knit with the region’s history and the vultures. In contrast, to sustain a compatible coexistence between mankind and nature, we need solutions to the problems arising from overgrazing of the goats. This is why the Forest Service in the last 30 years reforested the slopes that stand nearly barren from trees.

Despite the ominous future of free-range livestock due to low incomes, which are drastically declining each year, as well as the expansion of reforestation to protect the forest from overgrazing, the Valley keeps a hidden treasure. A medieval bridge that stands haughtily through the centuries and gives its own message: if everyone cooperates and respects the natural elements of this place, a solution can be found for the continuation of nomadic animal husbandry which is an integral human activity and supports the rare birds of the Valley.

Back to news
Manage Cookie Consent
We use cookies to optimise our website and our service.
Manage options Manage services Manage vendors Read more about these purposes
View preferences
{title} {title} {title}